In this section, questions are based on some statements and their conclusions and you are required to identify the correct conclusion(s). You are not supposed to apply extra information except from the information given in statements, while drawing the conclusion.

A proposition, also known as a premise, is a grammatical sentence which comprises a subject, a predicate and a copula.

• Quantifier The word 'All', 'No' and 'Some' are called quantifier as they specify a quantity.

• Subject (S) A subject is that part of a proposition about which something is said.

• Predicate (P) A predicate is that part of a proposition which is affirmed detail about the subject.

• Copula (C) A copula is that part of a proposition which says about the relation between the subject and the predicate.

Note:   The middle term should not appear in the conclusion

All ships are buses.

All cars are ships.

Conclusion All cars are buses.

All dogs are cats.

All cats are white.

Here, the middle term 'cats' is the subject of second statement.

Types of proposition can be understood by the following diagram

The four-fold proposition can be summarised as below

To draw valid inferences from the statements, the candidate is required to have a clear understanding of A, E, I, O relationships. 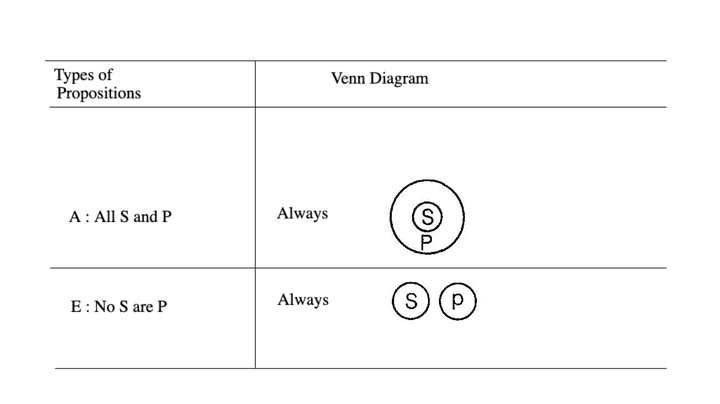 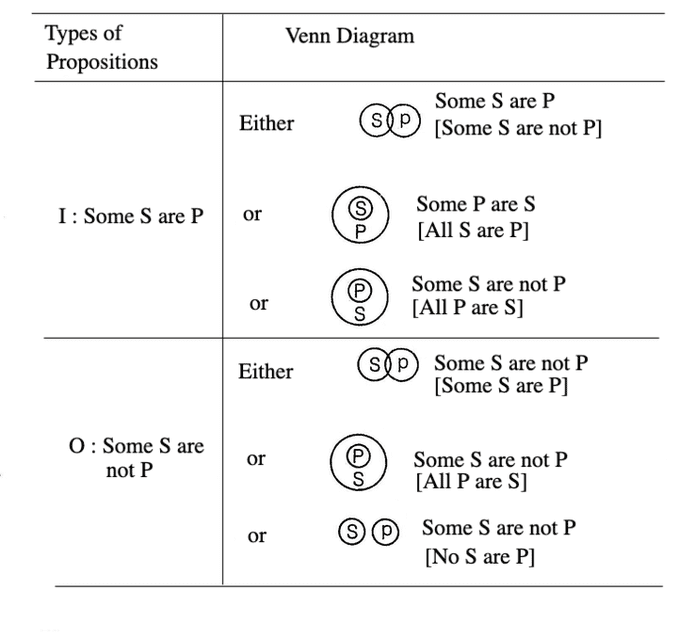 Inference is a logical conclusion derived from premises or statements known or assumed to be true.

There are two types of inferences (conclusions), which are as given below

When an inference is drawn from a single statement, then it is known as 'immediate inference'.

e.g. Statement All books are pages.

Conclusion Some pages are books.

In the above example, conclusion is drawn from a single statement and does not require the second statement to be referred. Hence, the inference is called an immediate inference.

There are various methods to draw immediate inferences like conversion, observation, contraposition, etc., but we are required to study only following two given methods.

(i) Implications While drawing a conclusion through implication, subject remains the subject and predicate remains the predicate.

Here, it is clear that if all boys are good, then some boys will definitely be good because some is a part of all.

Here, it is clear that if no bags are roses, then certainly some bags are not roses.

Immediate inference through implication can be presented as

I.    Statement All lamps are mangoes.

Conclusion Some mangoes are lamps.

II.   Statement No men are wise.

Conclusion No wise are men.

III.  Statement Some rivers are ponds.

Conclusion Some ponds are rivers.

In above cases, subject and predicate change their positions but the quality remains same.

In mediate inference, conclusion is drawn from two given statements

e.g. Statements   All dogs are cats.
All cats are black.

Conclusion    All dogs are black

Step #1: Properly align pair of propositions, i.e., the common term must be the predicate of the first proposition and the subject of the second.

Let us consider the following pair of statements.

Priority order The priority should be given while aligning. According to the following rule.

Step #2: After having aligned statements, if required, inference can be drawn using the table as given below

Let us consider the example

Some cars are scooters.

Some scooters are buses.

I.  Some cars are buses.

II. No cars are buses.

A complementary pair of conclusions must follow the following the conditions:

I. Both of them must have the same subject and the same predicate.

II. They are anyone of three types of pairs.

Note Here, we have already discussed the A, E, I and O types of the statements.

Statements Some cars are scooters. Some scooters are buses.

Here, we can draw all possible cases as given below.

Here, using both diagrammatical representation we can conclude either 'some cars are buses' or 'No cars are buses'. Hence, at least one of the conclusions must be true.

Possibility Cases in Syllogism and Solving them using Venn Diagrams

In syllogism, when there is no exact conclusion for the given statements, then possibility case arises.

Statements : Some walls are roads.

All roads are follows.

I.  All roads being walls is a possibility.

II. All walls being floors is a possibility.

Solution :  All possible diagrams are as follows

There are some rules, which are extremely helpful in deciding the conclusion whether it follows or not. They are given below

Rule #1: If one statement is negative, then the conclusion must be negative.

e.g. Statements : All books are rivers.

No river is big.

II. All books are big.

Since, one statement is negative, the conclusion must be negative. Thus, Conclusion II cannot follow, only Conclusion I follows.

So, it is clear that rivers are not big, so no book is big. So, only Conclusion I is true.

Rule #2: If one statement is particular, then the conclusion must be particular.

e.g. Statements : Some men are wise.

All wise are doctors.

I.  Some men are doctors.

II. All doctors are wise.

Conclusion II cannot follow from the given statements because if one statement is particular, then the conclusion must be particular.

Rule #3: If both the statements are affirmative, then the conclusion must be affirmative.

e.g. Statements : All books are schools.

All schools are papers.

I.  All books are papers.

II. Some schools are not books.

So, it is clear that all books are papers.
Hence, only Conclusion I follows.

Rule #4: If both the statements are particular, then no conclusion follows.

e.g. Statements : Some pens are bags.

Some bags are dogs.

II. Some dogs are pens.

Here, both the statements are particular.
Therefore, no conclusion follows.

Rule #5: If both the statements are negative, then no conclusion follows.

e.g. Statements : No man is woman.

No woman is apple.

II. Some apples are woman.

Here, both the statements are negative.
Therefore, no conclusion follows.

Rule #6: If major statement is affirmative, then the conclusion must be particular.

e.g. Statements : All animals are rats.

Some dogs are animals.

II. All rats are dogs.

Here, the first statement contains the middle term 'animals' as the subject and is thus, the major statement and is also affirmative. So, the conclusion must be particular. Therefore, Conclusion II cannot follow. Only Conclusion I follows.

So, it is clear that some dogs are rats.
So, Conclusion I follows.

e.g. Statements : Some lions are tigers.

No cats are lions.

I.  No lions are tigers.

II. Some tigers are cats.

There are two types of questions which are generally asked in different competitive examinations.

In this type of questions, two or more statements are given followed by conclusions.
On the basis of the given statements, the correctness of conclusion is checked or conclusion follows from the statement or not.

Directions (Example Nos. 1-4) Two statements are given in each of the following questions, followed by two Conclusions I and II. You have to take the given two statements to be true even, if they seem to be at variance from commonly known facts. Read the conclusions and then decide which of the given conclusions logically follows from the two disregarding known facts.

All huts are mansions.
All mansions are temples.

All huts are mansions + All the mansions are temples

So, Conclusion I follows.

Conclusion II All mansions are temples -------conversion-----> Some temples are mansions.

This shows the case of universal affirmative proposition. So,

Some camels are ships.
No ship is a boat.

I.  Some ships are camels.
II. Some camels are not boats.

Solution (d) According to the question,

It is clear from diagram that both Conclusion I and II follow.

Some chalks are dusters.
All the dusters are boards.

I.  Some chalks are boards.
II. No dusters is a board.

So, only Conclusion I follows.

Some birds are clouds.
Horse is a bird.

I.  Some clouds are birds.
II. Horse is not a cloud.

Solution (a) According to the question,

It is clear from diagram only Conclusion I follows.

From the above premises, which one of the following conclusions is true?

(a) Some crows are not parrots.
(b) No crows are parrots.
(c) Some parrots are not crows.
(d) No conclusion can be drawn.

No crows are parrots is correct conclusion according to the given statements.

Example 6. In the following question, three statements numbered I, II and III and four conclusions are given. Select the correct answer from the options given.

I.   Some newspapers are ACs.
II.  Some ACs are trees
III. All books are ACs.

Solution (c) According to the question,

But these two conclusions forms a complementary pair. Therefore, either 1 or 4 follows.

Solution (d) According to the question,

Type #2:
Find the Statements based on the given Conclusions

In this type of questions, two or more conclusions followed by four or five sets of statements are given. The candidate has to choose the correct set of statements that logically satisfies given conclusions.

Assume the given statements to be true even if they seem to be at variance from commonly known facts.

(e) None of the above

From the above diagram, it is clearly shown that some B is E and also some J is F.

LearnFrenzy provides you lots of fully solved Syllogism Questions and Answers with explanation.