Direction is the measurement of position of one object with respect to another object and displacement is the minimum distance between the starting point and final point of an object.

In this section, we deal with the questions in which a successive follow-up of directions is formulated and the candidate is required to ascertain the final direction or the distance between two points.

Before moving ahead, let us familiarize with some facts/concepts.

There are four main directions viz. East, West, North and South as shown in the figure given below 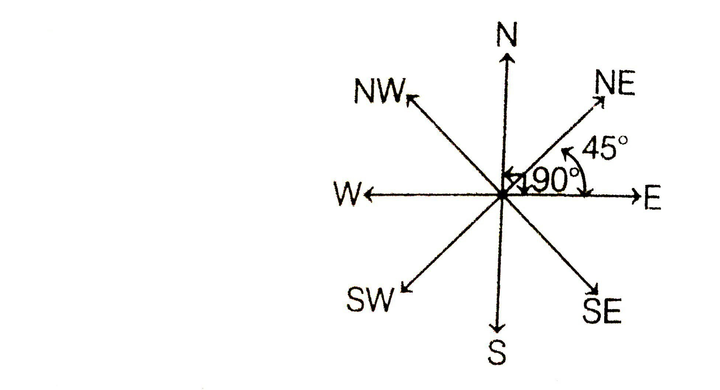 Students are advised to use diagram as given here, for the purpose of sensing directions.

For solving questions based on angle of movement, it is necessary to know the rotations which are given below

(i) Movement towards the right is called clockwise (CW) movement.

(ii) Movement towards the left is called anti-clockwise (ACW) movement.

Shadow at the Time of Sunrise

In the morning, sunrise in the East, the shadow of any person or object falls in the West.

Shadow at the Time of Sunset

In the evening, when the sunset in the West, the shadow of a person or an object falls in the East.

If we draw a straight line from the initial point of the object to the final point, then length of this line is called shortest distance.

e.g. An object starts from point A and reaches to point C after going through point B.

Then, distance between initial and final position = AB + BC

But shortest distance between initial and final position = AC

To find the shortest distance between two points, it is necessary to know Pythagoras theorem.

Hence, the shortest distance between A and C

Example 1:  Ravi walks 8 km North-East and then 6 km South-East. Find the total distance as well as shortest distance between starting and end points.

Solution:  (B) According to the question,

There are four types of questions which are generally asked in various competitive examinations.

Type #1: Based on Final Direction

These question are based on finding the final direction of an object with respect to its starting point.

Solution:  (C) According to the question, the direction diagram of Suman is a given below.

Example 2:  After starting from a point, a man walks 4 km towards West, then turning to his right he moves 4 km. After this, he again turns right and moves 4 km. Which choice given below indicates the correct direction in which he is from his starting point?

Solution:  (A) According to the question, the direction diagram of a man is as given below

Let A be the starting and D be the ending point of man. It is clear from diagram that, he is in North direction from his starting point.

Example 3:  If South-West becomes North, then what will North-East be?

Solution:  (C) The diagrammatic representation of direction is as shown below

Example 4:  A clock is so placed that at 12 noon its minute hand points towards North-East. In which direction does its hour hand point at 1:30 pm?

Solution:  (C) In this question, the clock is placed, so that at 12 noon its minute hand point towards North-East.

We know that, minute and hour hand point in the same direction at 12 noon. Therefore, the clock will look some what like this 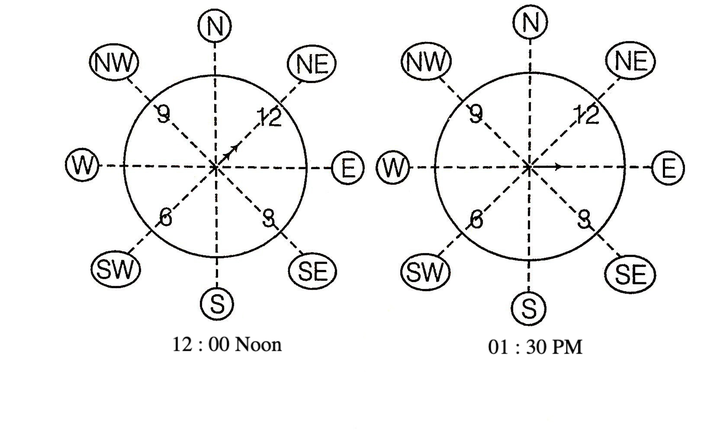 Example 6:  A person walks towards his house at 8:00 am and observes his shadow to his right. In which direction he is walking?

Clearly, the person is walking towards the South direction.

Type #2: Based on Displacement

Solution:  (D) According to the question, direction diagram of Vijay is a given below.

Let point A be the starting point and D be the final point of travelling of Vijay.

Solution:  (B) According to the question, the movements of the person are as given below

According to the question,

Type #3: Based on Direction and Displacement

In this type of questions, we have to determine both the distance and direction.

Example 1:  Shyam, goes 5 km in the North from his school. Now, turning to the left, he goes to 10 km and again turns to left and goes to 5 km. How far he is from his school and in which direction?

Solution:  (C) According to the question, the movements of Shyam are given below

Let point A be the starting point, i.e. school of Shyam and point D be the final point.

So, Shyam is 10 km far away from his school and in West direction from school.

Example 2:  x and Y start from the same point X walks 40 m North, then turns West and walks 80 m, then turns to his right and walks 50 m. At the same time, Y walks 90 m North. Where is Y now with respect to the position of X?

Solution:  (D) According to the question, diagram is as given below