To solve these questions, the candidates are required to understand the rule that has been followed to code a particular word/message.

Position of Letters in English Alphabet

Sometimes a word or a sentence is coded by changing the position of English alphabet letters according to a definite pattern, so it is necessary to remember the positions of all the letters in English alphabetical order, both in forward and backward order. 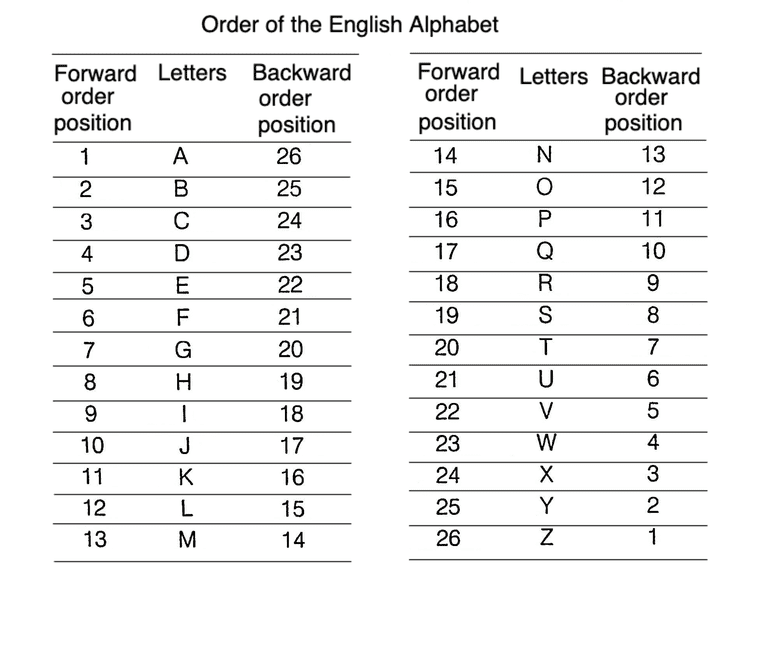 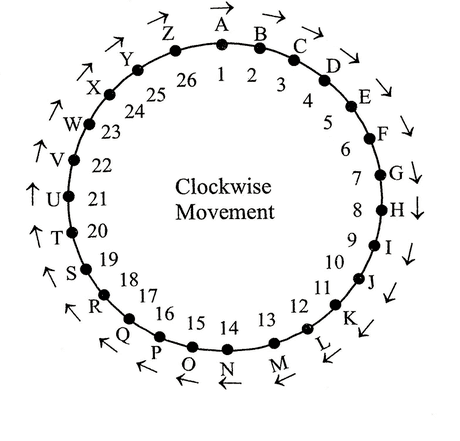 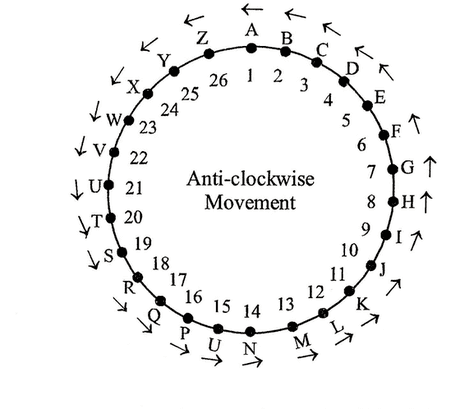 Method to Remember the Position of Letters in English Alphabet

Some method/techniques are given to remember the positions of English alphabets in forward or backward order.

1. By using EJOTY and CFILORUX formulae, we can easily remember the position of letters of English alphabet in forward order. 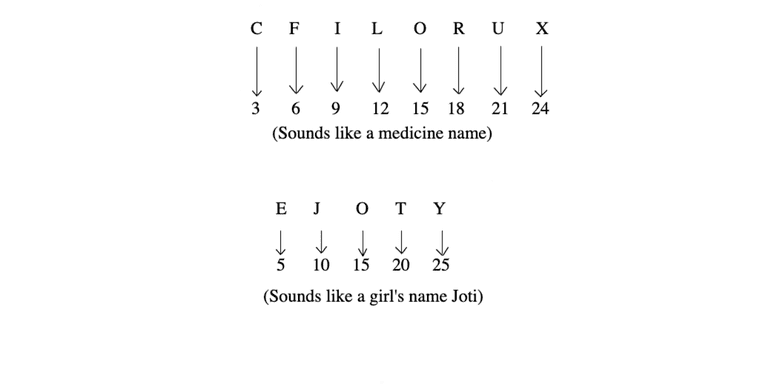 e.g. Backward order position of B

2. By Using V Q L G B and X U R O L I F C, we can easily remember the position of letters of English alphabet is reverse order.

Following are the categories/Types of coding-decoding, which are generally asked in various competitive examinations.

In this type of coding, we deal with questions, in which the letters of a word are replaced by certain other letters or numbers according to a specific pattern/rule to form a code. You are required to detect the coding pattern/rule and answer the question(s) that are asked, based on that coding pattern/rule. 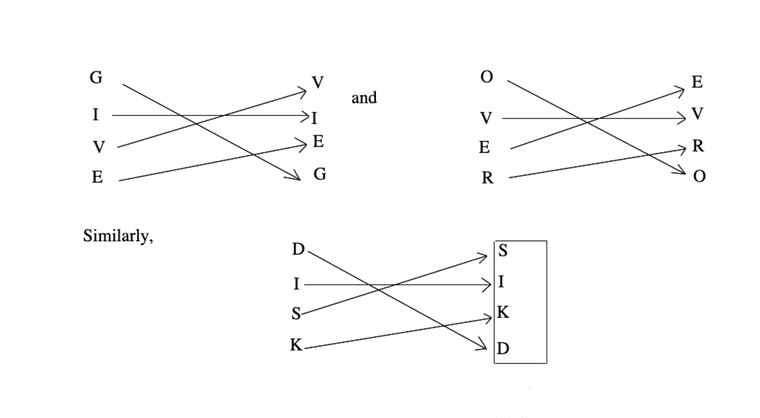 Example 2: If in a certain code 'INTELLIGENCE' is written as 'ETNIGILLECNE', then how can 'MATHEMATICAL' be written in the same code?

Example 3: If GOODNESS is coded as HNPCODTR, then how GREATNESS can be written in that code?

Solution:  (d) Clearly, the letters in the word GOODNESS are moved one step forward and one step backward, alternately to obtain the letters of the code. 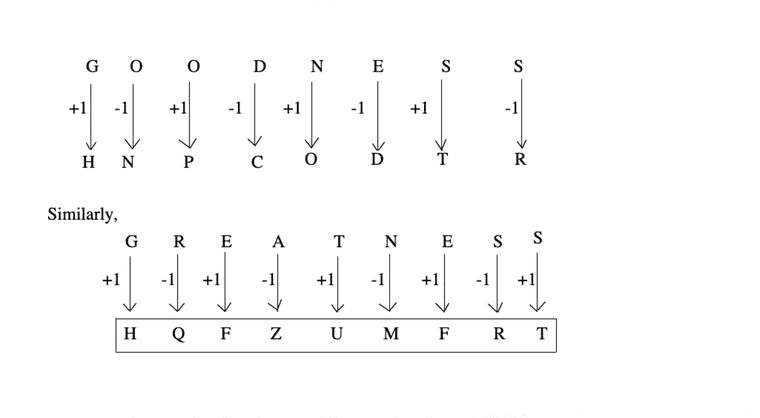 Example 4: If GRASP is code as TIZHK, what will be code as OVTZXB? 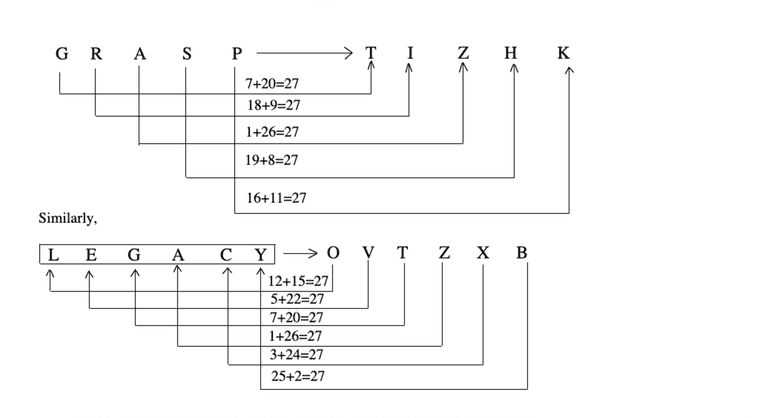 In direct coding, the code letters/numbers/ symbols occur in the same sequence as the corresponding letters occur in the words. This is basically a direct substitution method. 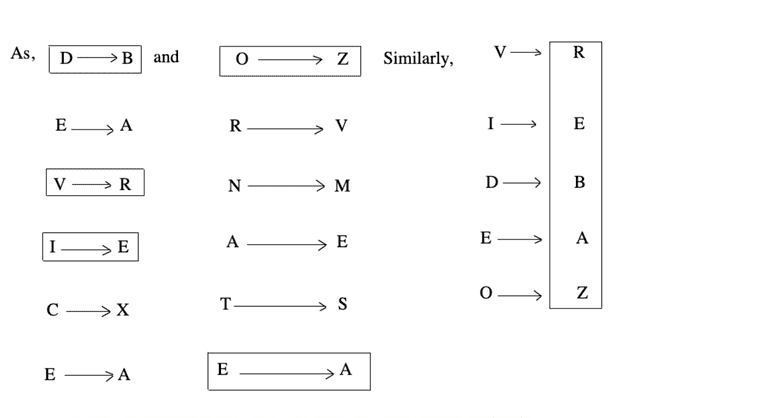 In this type, letters/numbers are given along with their code. Candidates are required to find the codes for a particular letter group/word/number according to certain conditions given in the questions.

Directions (Examples 11 - 13) Study the following letters and their corresponding digits code followed by certain conditions of coding and then answer the questions given below them by finding out which of the digits combinations given in (a), (b), (c) and (d) is the coded form of the letters-groups given in each question and mark your answer accordingly.

(I)    If both the first and the last letters in the group are vowels, both should be coded as $.

(II)   If both the first and the last letters in the group are consonants, both should be coded as #.

Solution:  (c) We know that, in English alphabets A, E, I, O, U letters are vowels and remaining letters are consonants.

(d) None of these

Solution:  (b) We know that, in English alphabets A, E, I, O, U letters are vowels and remaining letters are consonants.

Solution:  (b) We know that, in English alphabets A, E, I, O, U letters are vowels and remaining letters are consonants.

Here, coded form of two or more sentences is given and you are required to find the code of a particular word or message.

To analyse such codes, any two messages bearing a common word/number are picked up. The common code will represent that particular word/number.

Proceeding similarly by picking up all possible combinations of two, the entire message can be decoded and the codes for every individual word/number can be found.

In some cases, there is no common word/number in the message given. In those cases, the words/numbers are coded separately. You have to identify the correct pattern of coding and find the code for the word or message given in the question.

Solution:  (d) according to the question, we have

Solution:  (c) according to the question, we have

Directions (Examples 16 - 17) Study the following information carefully and answer the questions given below.

Example 16: Which of the following is the code for 'translate'?

Solution:  (b) Here, symbols are coded as per the first letter of the word.

Example 17: In the given code language, what does the code '%D4' represent?

Solution:  (d) Here, symbols are coded as per the first letter of the word.

Solution:  (b) We know that, peacock is the Indian National Bird but here peacock is known as swallow.

So, the answer is swallow.

Example 20: On another planet the local terminology for 'earth', 'water', 'light' 'air' and 'sky' are sky, light, 'air', water and 'earth' respectively. If someone is thirsty there what would he drink?

Solution:  (a) One drinks water when he is thirsty.

since, 'water' drink 'light' when he is thirsty there. So, the answer is 'light'.