Blood Relation problems mainly deal with the hierarchical structure of a family i.e., grand-parents, parents and children etc. Different relationships between the family members of different generations are given. To solve such questions, the entire family tree is to be constructed by plotting out the various relationships.

A blood relation is a very important topic of any Aptitude Test. Such questions may be asked directly or may be given in the form of coded blood relations or data sufficiency questions.

Basic Relationships Part I (Must be remembered):

2. The only son of your father = Yourself

7. The only daughter of the father = Sister

9. Son of the only son of the grandfather = Brother

10. Daughter of the only son of grandfather = Sister

Relations from one generation to next: 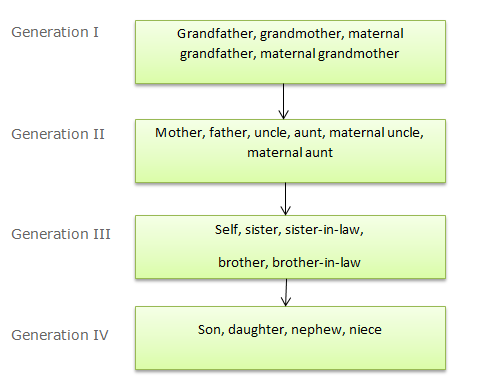 Generally, the question deals with a hierarchical structure which is based on seven generation three above & three below like this:

Question: Pointing to a photograph of a boy Suresh said, "He is the son of the only son of my mother." How is Suresh related to that boy?

Suresh’s mother’s only son is Suresh himself. So, the boy in the photo is Suresh’s son, i.e.

Suresh is the boy’s father. The answer is then D.

Analyzing the options, we see,

Thus, P is the mother of J’s aunt.

Or, in other words, P is the grandmother of J.

Analyzing the options, we see,

E is the uncle of C

C is the granddaughter of E.

Hence, the correct option is C.