This type of problems is also a relatively new feature but nowadays it is appearing quite frequently. The problem involves interpreting a given relationship-string which is coded in a particular fashion and then matching it with the relationship mentioned in the question. The process of decoding each and every relation and then interpreting from the given relationship-string the final relationship is a cumbersome process and doing all of it for all the choices makes it very time taking.
However, some clever short-cut techniques may make the solution miraculously quick. Let us see how. But before that, let us have a look at a sample problem.

Directions (Q. 1-2) Read the following information to answer the questions:

Q. 2 Which of the following means 'S has a blood-relationship with T' ?

In order to explain many of the points that I am going to make later in the chapter, I will be referring to some of these codes again and again. In order to avoid confusion and also to avoid repetition, I am going to follow one standard set of codes for the rest of this chapter. (Later, of course, when we face the actual problems we will follow the coding pattern as given in that problem.)
So, our standard coding system for the rest of the chapter will be as follows.

The difference is obvious by its very appearance.

Forward Type : In the forward type codes, the first person is the given relation of the second person.

For example, in A + B, the relationship is of father. Now, in A + B, A appears first and B later. So, A is the father of B means it is a forward-type code.

Backward Type : In the backward type code, the second person is the given relation of the first person.

For example, in A ^ B, the relationship is again that of father. But, here, the second man is the father. So, here, the meaning is that B is the father of A and hence it is a backward-type coding.

We will now discuss some quick methods to eliminate the wrong answers:

Sometimes the person under consideration must be a male (or a female) if the given answer choice were to true. But the choices start with information's that the person is a mother- sister.. (or a father, brother.) etc, which means that this choice can be easily eliminated.

Consider the following examples to understands this.

Ex. 1:  Which of the following means that "A is the grandmother of B" ?

Here, in the question, since A is to be the grandmother of B. A must be a female. But the very first word in (1) and (2) mean that A is a male. Because in (1), A + B means A is father (a male) of B and in (2), A x C means A is the brother (a male) of C. Therefore, in these two choices we don't need to look any further and straightaway eliminate them.

Ex. 3:  Which of the following means that "B is the grandfather of E" ?

Note that Ex. 3 was a case where the relationships were coded in the backward type format. And in this case we rejected the wrong choices (2), (3) and (4) because there the code that indicated the wrong sex of B appeared before B.

On the other hand, in Ex. 1 and Ex. 2, the relationships were coded in the forward type format. And in that case we rejected the wrong choices because there the codes that indicated the wrong sex of A and X appeared after A and x.

This give us our brief and quick short-cut technique.

Ex.1 : Person in question is A (because the question wants us to find if A is the grandmother). All coding's are forward-type. Now, immediately after A, we have + and x sign in choices (1) and (2) respectively and these indicate the wrong sex because + and x mean father and brother respectively which is a male-sex. So, (1) and (2) are eliminated.

Ex. 2: Person in question in X (because the question wants us to find if X is a grandson). Coding's are forward-type. Now, immediately after X, we have ÷ in (1) and (2) and β in (4). They indicate wrong (female) sex as + stands for sister and β stands for daughter. So, choices 1, 2 and 4 are quickly eliminated.

Ex. 3: Person in question is B (because the question wants us to find if B is a grandfather). Here, the coding's are backward-type and hence we analyse the symbols immediately before B. The symbols immediately before B are <, $ and $ in choice 2, 3 and 4. They indicate the wrong sex (female) as < stands for daughter and $ stands for sister. So, 2, 3 and 4 are quickly eliminated.

It may be time-consuming to actually draw the family-tree (using the method I am going to describe later) and see if A is indeed a, say, grandfather of say, B. But we can easily and quickly check by giving mere cursory glances that A is indeed two generations over B. So, all choices that are possibly correct must have a generation gap of 2 between A and B.
Using this tip we can eliminate all the choices that don't have this necessary generation gap.

Consider the following statements, for example:

• Since a son is a generation below the father's generation, we take the gap as negative. So, in cases of sons or daughters, the generation gap is taken as 1.

By the foregoing analysis it is clear that:

Now for each choice, calculate the generation-gap between two persons.

How to calculate the generation-gap between two persons

We give below an easy, step-by-step approach to calculate the generation gap:

Step #1: Take one of the persons under consideration

Conclusion: A is of C's father's generation.

Conclusion: B is E's grandson's generation

Conclusion: A is G's son's generation

This is a backward-coding case. So, we will always take the right letter and move to the left.

Conclusion: S and Q are of the same generation.

In this case, finding generation-gap is still easier and fast. Just take the two persons under consideration and consider the symbols between them. Ignore all brother/sister/husband/wife/relations. Put +1 for mother-father and -1 for son-daughter and; add. Usually we have forward-coding, so start from left to right.

The tips given in above are techniques for quickly eliminating the obviously wrong answers. But even after employing that technique, we may not be able to eliminate all the wrong choices. In that case, two or more choices may still be left for consideration. If that be case, we will have to actually analyse each of these remaining choices and see which one is correct.

The best way to draw quick conclusions about relationships in these type of questions is by drawing family tree.

Here we give a brief method:

For example, consider the following diagram: 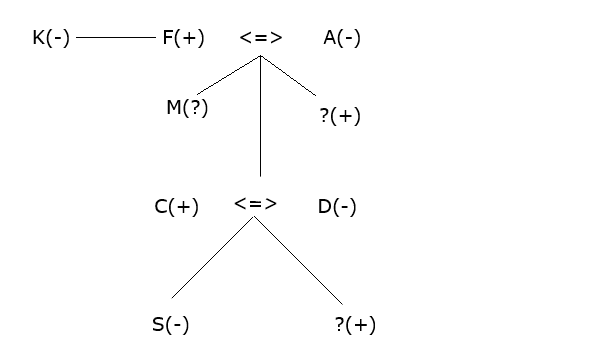 The above diagram tell us that:

We are now in a position to lay down our integrated approach towards our solution. That is:

Step I: Eliminate all wrong choices by the quick method discussed in above

(a) check sex and (b) check generation-gap

Step II: Draw family-tree for the remaining choices and pick the correct answer.